Home The Sweet Connection Between Cannabis, Holistics, and Diabetes
DDiabetes

The Sweet Connection Between Cannabis, Holistics, and Diabetes

It is widely known and supported by research that cannabis can help manage health conditions like chronic pain. This has led some people to ask if it could also help people living with diabetes, or prevent it from ever occurring. While the science in this area is just emerging, the results look promising.

Diabetes can manifest in our lives in various ways. Key diabetes management and prevention often revolve around understanding the causes we may be more susceptible to.

Insulin resistance, i.e. your organs like your liver are requiring more and more insulin to respond, leading to excess glucose, which increases the risk of developing prediabetes, and eventually types 2 diabetes. The cause of insulin resistance is attributed to both genetic and lifestyle factors.

A leaky gut is a term used to describe a loosening of the intestinal barrier allowing bacteria and toxins to move into the system through the blood. This will cause an immune reaction as the body’s response to foreign bacteria in the bloodstream.

– Recent studies have shown that leaky gut syndrome may lead to insulin resistance as the immune response can damage the pancreatic beta cells.

– Ethnicity may also be a factor, as several groups have an increased incidence of diabetes. If you’re interested in finding out if you may be genetically predisposed to getting diabetes, consider trying a DNA test.

A critical part of managing and preventing diabetes is maintaining optimal levels of blood sugar and reducing insulin resistance. While one of the widely known side effects of cannabis use is that it increases appetite (commonly referred to as the “munchies”), studies are finding that chemicals present in Cannabis, including CBD, have the opposite effect. Some of these chemicals can help you lower your insulin resistance, decrease your appetite, increase metabolic rates, and help you manage cravings.

For example, Cannabis users have an insulin resistance level that is 17 percent less than their non-using counterparts, had lower fasting insulin levels, as well as a smaller waist size even though cannabis users tend to eat more calories. 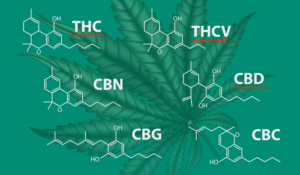 Neuropathy is a common complication of diabetes and often results in nerve pain, which is more difficult to manage and often resistant to traditional medication. However, cannabis (CBD and THC) are both effective pain-relievers and can help manage even the painful symptoms of neuropathy.

CBD and THC are also anti-inflammatories. Because arterial inflammation is prevalent in patients with diabetes, CBD and THC can be used to help relieve it as well.

Strains high in THCV, like Durban Poison, and hemp-based CBD-only products are great ways to start managing and preventing diabetes.

This vape pen gives you not only the benefits of CBD but cinnamon as well. Both CBD and cinnamon are known to lower blood sugar and most people associate cinnamon with sugary foods so it can feel like a treat.

Getting a workout to manage diabetes is easier with the Canndescent Charge. With 1/8th oz. cannabis flower and convenient rolling papers and matches, Canndescent Charge will help improve energy and motivation to get moving.

All the benefits of CBD combined with the antioxidant powers of organic goji berries and chocolate. Best of all, this low-sugar superfood treat is sourced from producers who are committed to fair-trade and regenerative farming.

These organic hemp seeds provide low levels of some cannabinoids, like CBD. They’re also rich in nutrients, such as unsaturated fats, vitamins, and minerals. Vital nutrients, combined with CBD, are important for managing diabetes.

To enjoy all of the miraculous benefits of THCV via a controlled dosage, try a Bilingual. These are a fast-acting, micro-dosed cannabis experience designed to deliver an active compound orally, giving you the effects of appetite reduction, insulin resistance reduction, and blood sugar regulation when you need it.

Addressing the Causes of Diabetes with a Holistic Approach

These treatments can help manage diabetes, but they don’t stop the progression of the disease. The good news is that there are alternative methods including lifestyle changes, dietary changes, and supplements that can help.

Making small changes in your daily life can have a big impact on effectively managing your diabetes.

2. Take a short walk after meals

Taking a short moderately-paced, 15-minute walk after eating, around the office, or in your home, is a simple, yet relaxing way to lower blood sugar.

3. Adding cinnamon and other herbs

There are other foods you may want to consume more of, such as cinnamon, ginger, and fenugreek. These herbs can help you keep your blood sugar down.

A Holistic Approach to Treating Acne with Cannabis & CBD

The Five Types of Legal Cannabis in Florida