Currently, the legality of cannabis in the U.S. is a bit of a mixed bag. Many states have legalized medicinal marijuana programs. A growing number of states already have legal recreational cannabis, with more expected to do so in the near future.

The industry has grown rapidly, with some Wall Street estimates putting growth as high as $200 billion within a decade. U.S. spending on legal, licensed recreational cannabis is expected to surpass an estimated $7.3 billion in 2019.

Each state that legalizes medicinal or recreational cannabis has its own laws and regulations regarding the sale, cultivation, and consumption of cannabis. These nuances are important for users to note, as what is legal in one state may not be legal in another.

The Rise of Recreational Cannabis

But cannabis is still federally illegal. In fact, it’s still classified as a Schedule I substance under the Controlled Substances Act of 1970. Schedule I is a classification reserved for drugs that have a high potential for abuse, no accepted medical uses, and a lack of safety when used — which has been a source of controversy for decades.

With each state enacting their own (often separate) medicinal and recreational marijuana laws, it’s easy to see how it could be difficult to track and confusing to understand. 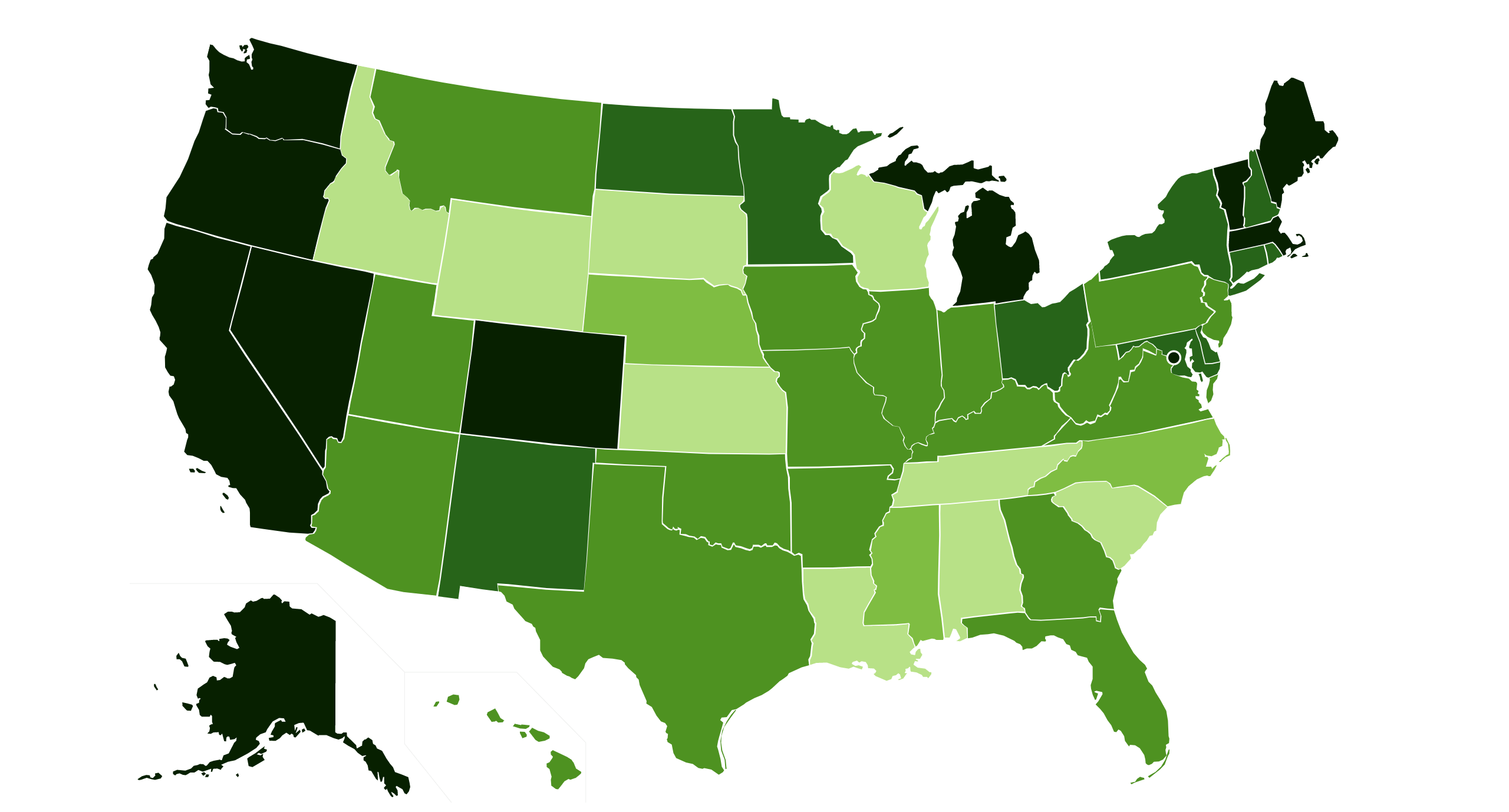 The recreational use of cannabis is currently legal in 11 US states. Those states are:

Recreational cannabis is also legal in the District of Columbia, Northern Mariana Islands, and Guam. Beyond full legalization, 15 states (and the US Virgin Islands) have decriminalized its use or possession and a variety of states are considering their own legalization initiatives.

Each state has its own set of rules and regulations regarding the sale and use of cannabis within the state. Most states have limited the amount that a person can hold at one time. In Oregon, for instance, you can only legally have 1 ounce of cannabis flower on you while in public but may hold up to 8 ounces in your home.

Other regulations may limit different types of consumption methods or dosages. In Washington, edible marijuana foods are required to be individually packaged and contain no more than 10 mg of THC.

There are also differences between the states surrounding the ability to grow cannabis in your home. In states like Oregon, California, Alaska, Colorado, Massachusetts, Michigan, home cultivation of marijuana plants is legal, with limits on the number of plants (mature or immature) that you can possess at any given time. In other states like Washington, and Illinois growing recreational cannabis is not permitted, although most medicinal states allow for cultivation within set limits.

Since California legalized medical marijuana with Proposition 215 in 1996, an additional 32 states have legalized medicinal cannabis in some capacity, along with the District of Columbia, Guam, U.S. Virgin Islands, and Puerto Rico.

Like recreational legalization, there are a lot of differences and nuances between the medical cannabis laws in each state. All medical marijuana states have a list of “approved conditions” that qualify you for acceptance into their program. Some states offer medical marijuana to patients with a wider range of conditions than others.

While these conditions are common to many states, it’s important to remember that every state is different. You should check into your state’s laws to see if your condition qualifies you for medical cannabis.

Each state has its own laws around consumption and possession limits. Many also have unique processes for obtaining a medical marijuana license or entering their medical program. Additionally, each state has laws regarding whether acceptance in another state’s medical cannabis program qualifies you for participation in their own program as well. As an example, Maine is one of a few states that allows visitors from any other medical-legal state to purchase cannabis at their medical dispensaries.

CBD, a series of compounds derived from cannabis that was previously illegal, was legalized in 2018. It is sold in all 50 states and associated US territories. Today you can likely walk into your local drug store and find CBD products on sale.

The Agriculture Improvement Act of 2018 legalizes CBD that is derived from hemp and contains no more than 0.3% THC. The illegality of CBD had been a source of controversy and frustration for many years, particularly as the health benefits of CBD started to become more apparent.

A wealth of evidence regarding CBDs’ ability to treat many medical conditions is piling up. These conditions include:

CBD sales have skyrocketed since legalization. Experts are predicting 107% annual growth in the CBD market through at least 2023.

What’s Next for Cannabis Legalization?

There is a lot of momentum in the legalization movement. With 11 U.S. states already having legalized recreational cannabis, non-legal states are watching as those states continue to collect impressive tax revenues from its legalization.

More than half of state legislatures considered cannabis legalization in 2019, a record number. States like Connecticut, New York, and New Mexico were expected to legalize in 2019 but saw their bills stall before going to a vote.

While predicting what states will vote to legalize recreational marijuana next can be difficult, one thing is sure — we will see a wave of legalization efforts in several states over the next few years.

One downside of this trend is that initiatives to legalize medical marijuana in several non-legal states seem to have stalled, likely in anticipation of broader legalization efforts.

Whether your state is recreational-legal, medicinal-legal, or non-legal (CBD only) — Heally is here to help! Try out our preroll and hemp oil capsules to celebrate legalization and provide relief for a variety of ailments:

Celebrate legalization with a joint! Boss OG is a euphoric indica hybrid descendant of OG Kush. It features an earthy, fruity flavor. A powerful pain reliever that has been known to relieve pain and improve appetite. 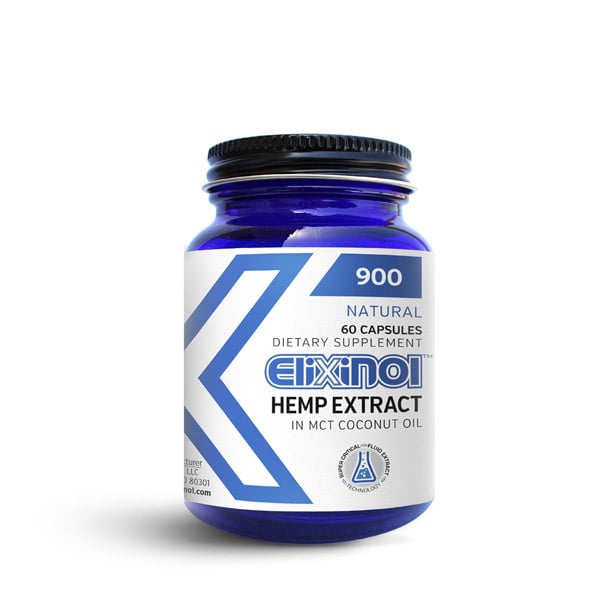 A full-spectrum CBD product that provides all of the benefits in an easily consumed package. Made with only natural ingredients. Elixinol CBD capsules absorb quickly into the body and are an effective format for those with inflammation of the digestive system. 30 capsules per bottle, a total of 450 mg of CBD per bottle.

7 Types of Cannabis and CBD Products Available in Rhode Island

The 7 Types of Cannabis Products Available in Maryland